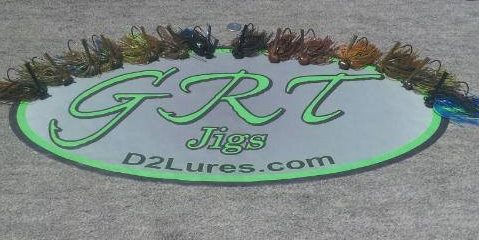 Thank you to our Club Sponsor D2 Lures!!  The bait used primarily to win the CCBM AOY 2 out of the last 4 years!!! 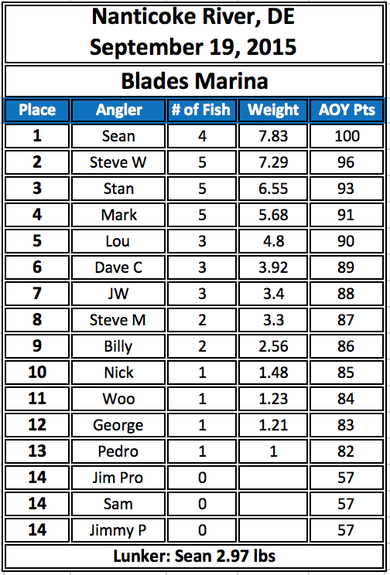 After a slow start to the day due to heavy fog on the way to the ramp and on the water two previous AOY's catch em and another gives himself a real chance for his first AOY title.

Sean Geerlof finds himself atop  the deep field of anglers capable of winning this tournament.

Sean brings only 4 fish to the scales but is just enough to win after catching the days lunker fish(2.97 lbs) and a small keeper with 10 mins left in the day. Winning weight was 7.83 lbs.

Steve Weimar is making a strong run at AOY for 2015! Whether he wins or not he is having a great year for sure.

Steve brings a limit to the scales while taking his 5th top 3 of the year. Steve's limit of Nanticoke Largemouth weighed 7.29 lbs and had the 2nd largest fish of the day.


Another strong angler  looking to put pressure on the top guys in the AOY race is Stan Horne. Stan caught a lot of fish on this day but had a tough job upgrading. Stan's bag of fish weighed 6.55 lbs and gives him 3rd place points. With 3 tx's left he is still in the running for AOY. 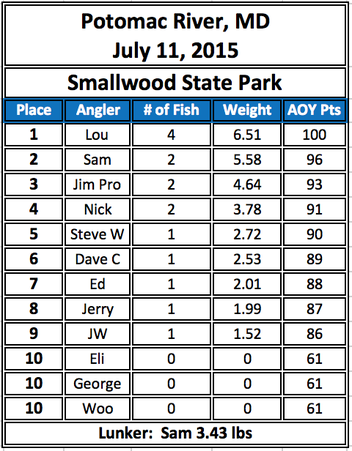 .
A rainy nasty day meets the CCBM on tx day on the Potomac River. We end up with a veteran of the Potomac and 2 rookies finishing in the top 3

With less than ideal conditions the one-time AOY Louie Croce shows the young guys how it is done on this massive body of water.

Louie finds himself on much smaller fish than what is typical on the Potomac. His bag of 4 fish bring him to the scales with 6.51 lbs but more importantly 1st place points towards AOY.

In 2nd place is Sam Montalto. Fishing for his 1st time on this river he was able to find enough fish to put him in 2nd place on a tough day. His bag of 2 fish weighed 5.58 lbs which included the day's lunker bass of 3.43 lbs.

Rounding out the top 3 is a guy by name who should be found there. Jim Pro brings 2 fish  weighing 4.64 lbs to the scales and takes his first top 3 of his rookie year with CCBM. 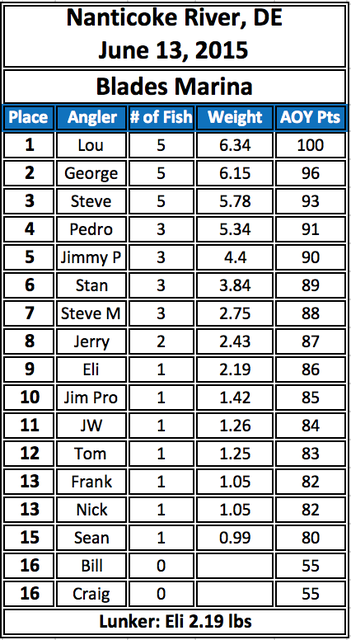 While fishing on a usually generous body of water called the Nanticoke River out of Blades Marina, the river threw most a curve ball. The fish seemed to be in the transition between spawn and post spawn significantly putting the bass in a negative mood.

3 anglers seemed to put things together and find a limit.

Lou Croce puts 2 top 3 finishes together in a row with a limit weighing 6.34 lbs. With the next tournament being the Potomac he is very anxious to go for three top 3 finishes in a row.

George Waeckel does one better making this his 3rd top 3 in the last 4 tournaments with a tight race with Louie for the top spot but falls just short. His limit of bass weighing 6.15 lbs was a enough for 2nd place points on a tough day.

In 3rd place was our TD Steve Weimar. Steve is also having a good season finishing in the top 4 in 3 out of 4 tournaments. Steve's bag of Largemouth weighing 5.78 lbs puts him in great position down the road when we tally up the points for AOY.

Our Lunker winner for this tournament is no other than our President Eli Amilani. This is not his first lunker on this body of water. In fact Eli is usually the one you need to look out for when you think you have Lunker in your livewell. His Lunker weighed 2.19 lbs. 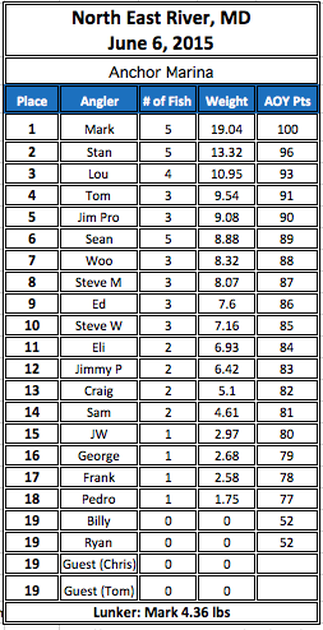 Chester County Bass Masters AOY runner up goes Back to Back with his second win in a row on the North East River while other CCBM's finish strong behind him.

Mark Ely continues to rewrite the record books in 2015. Mark weighs in a huge bag to win his 2nd tx this year on the NE.

Mark anchors his limit of bass with a 4.36 lb bass to beat a field of 22 anglers.

Stan Horne finishes strong and gets 2nd place points. Stan was on the fish all day but was not able to get the ones that would help him win in the boat.

Stan is looking to get back into that AOY seat and makes a strong move towards that spot with his limit of bass weighing 13.32 lbs
Louie Croce returns to the top 3 with some solid fish in his bag.  Not able to land that 5th fish it puts him just shy of 2nd place but takes a solid 3rd place and the points that come with it. They will be needed at the end of the year for sure when determining AOY. His bag weighed 10.95 lbs 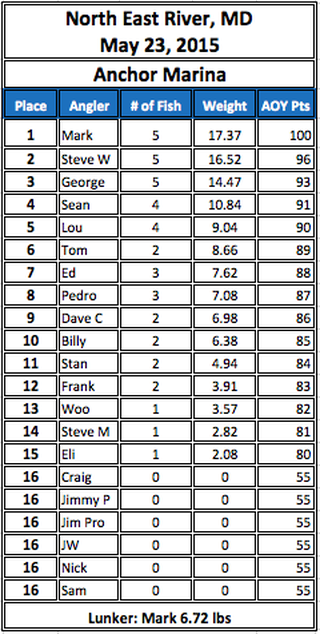 Chester County Bass Masters AOY runner up stuns fellow anglers with a fish that would even be respectable on Okeechobee, Weimar a model of consistency, And another angler does it again!!

Mark Ely shows why he was in the top 3 for AOY in 3 out of the last 4 years. All he seems to do is find big kicker fish!!

Mark anchors his limit of bass with a 6.72 lb bass to squeak a win on the North East River. He also moves into 2nd place for biggest bass in club history.

Mark's bag of bass weighing 17.37 were just enough to bump out last year's Classic Champ who did the same thing to him just 6 months ago!!

Steve Weimar enters the day in the zone and stays there. All day long Steve was Bugging the bass into the boat, and not just any bass but solid 3+ lb bass all day.

In the end he comes up just short but a 2nd place finish will be big come the end of the year when figuring out AOY for 2015.

Steve's weighs 16.52 lbs and looks forward to doing it again at our next tx on June 6th on the North East River.

Just as I said last tx "George Waeckel is no stranger to the top 3". This time it is on the North East River. A place he loves so much that I can see him running the ramp every Saturday if he ever decides to retire. 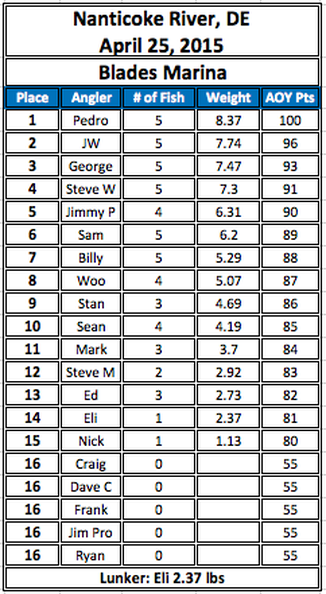 Chester county Bass Masters starts its season out with a bang. In our opening tournament we have a CCBM rookie with a win, last year's Rider of The Year takes second and the club as a whole sets a record.

CCBM rookie Pedro Roch wastes no time showing he is ready to fish with the big boys by winning the first tournament he has ever fished as a CCBM member. Pedro weighs in a limit of nice Nanticoke bass weighing 8.37 lbs. He is looking forward to showing everyone he is no one-trick pony by doing well at our next tournament on the North East River on May 23rd.

JW Wade further proves that "The co angler is at a huge disadvantage" myth is just that. JW had 4 fish early and right before calling it a day he boats his 5th keeper and 2nd place finish at the same time. His 5 fish weighed 7.74 lbs. JW will have a tough year fighting for another Rider of the Year title.

George Waeckel is no stranger to the top 3 on the Nanticoke. George had a good day on the water culling all day but only by ounces. George's limit goes 7.47lbs and is enough to squeak past last year's Classic Champ Steve Weimar who weighs 7.30 lbs.

Club President Eli Amilani once again shows his ability to find bigger than average bass on the Nanticoke River. Eli wins lunker for the day after catching this fat 2.37 lb Largemouth.