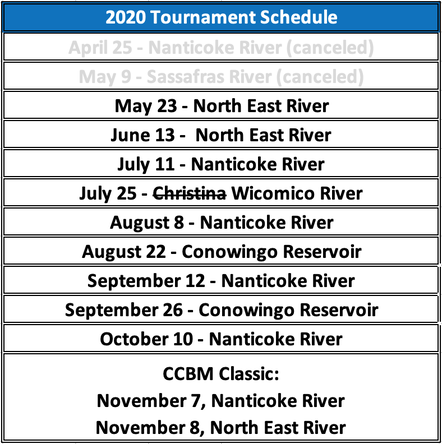 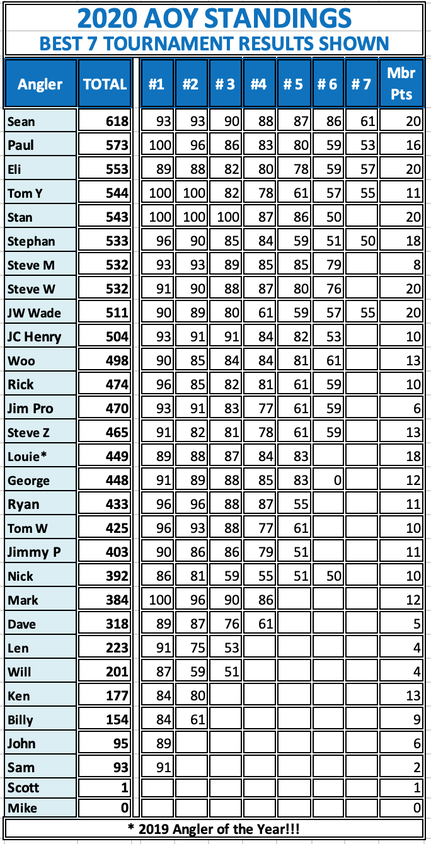 ​A long wait to do this little thing we love called Fishing but we finally got our first tx in the books for 2020.

When you talk about destroying the field it looks like this as the winner beats the nearest finisher by nearly 6 lbs. A new member but not new to the club takes a 2nd place finish in his first club tx while last year's ROY takes a 3rd place finish and other awards.

Mark Ely starts the season with a big bag of largemouth. When many other anglers were catching good fish, he was catching fatties! His bag goes 17.65 lbs and takes an early lead in the AOY standings.
​

Paul Sirochman walks in the door and walks out 2nd on the AOY standings leaderboard. Paul just misses his limit and weighs in 11.71 lbs. With 3 other anglers within 1.25 lbs of him, Paul makes it through his first tx in great shape.
​

​Steve Manista picks up where he left off in 2019 when he won Rider of the Year and takes 3rd today. His weight of 11.59 lbs included the day's lunker. That Lunker weighs 5.90 lbs and also took the club's rolling lunker pot that was  unclaimed since this time last year.

​
​​So far 2020 has started out completely different than last year as we have a different winner and completely new top 3 finishers in tx number 2.
AOY standings so far are very tight going into tx 3.

​Stan Horne takes advantage of the blown out tide to take the win. He focused on areas that had the deepest water near spawning areas to catch the most and biggest Bass!

​Rick Mullen, after expressing the desire to be more consistent on the Upper Bay, follows up a good day on the bay last week with a 2nd place finish a week later.

Rick's limit of bass weighs 14.26 lbs as he hopes to continue to improve going forward and making the club's prestigious top 6.

​Sean Geerlof takes 3rd place after taking advantage of a early bite, getting 3 in the box  by 8am.

​His bag of largemouth weighed in at 13.11 lbs with 3 other anglers right behind him within less than 1 lb of him.

​In a day when bigger fish were hard to find, George Waeckel lands a Upper Bay Fattie! His 4.77 lb bass gave him Lunker for the day.

​Dealing with some high water  lead to a tough bite but left our winning angler in a position for some  last second heroics.
Our 2nd place angler also caught a few late fish to jump him into the top 3 while the 2nd runner up takes advantage of an early bite to carry him into the points.

Stan Horne makes it two tournaments in a row with another win!! With most anglers having fished one more tx than him, he finds himself  in 11th place but, once he fishes his 7th scorable tx, we expect him to be near the top, if not leading the AOY race, if he continues to load the boat.

With high water and a tide that did not want to go out, Stan waited until the last second to allow the tide to start heading out and ran to some deep water pads where he know the bass would set up perfectly for a late day bite. His bag of largemouth weighs in at 10.78 lbs which was anchored by the day's Lunker that weighed 3.98 lbs!!

Another angler that took advantage of a late day bite was Stephan Sirochman. Largemouth went on a late day binge and Stephan found himself on the right spot and got his bait in front of several good-sized largemouth.
Stephan's bag weighs in at 7.74 lbs and jumps him into 2nd place for the day.

​Sean Geerlof takes 3rd place again which makes it 3 txs in a row where he finishes in the top 4. This puts him in the lead for AOY for the moment but he realizes he has to turn 3rd place finishes into wins if he hopes to stay atop of the AOY leaderboard.
Sean's bag weighs in at 6.95 lbs.
​CCBM Tournament #4
July 25, 2020- Wicomico River
​
​The day started out with one angler's trailer suffering a tire blow out on the way to the ramp, leading to a late start but all worked out perfectly for our winner.
A 2nd year boater takes his first top 3 on unfamiliar water, while a new member continues to impress.

Tom Yaw takes his first win as a member of CCBM. An early bite kept Tom's confidence high throughout the day and paid off big. With 3 big bites weighing in at 9.29 lbs, Tom makes a big jump up the leaderboard with an impressive win.

Tom Wood takes home a 2nd place finish on a body of water that we don't normally fish. Tom is looking forward to stringing together a few good finishes on a shortened season. Tom weighed in 4 fish for 8.39 lbs and takes 2nd place points.

JC Henry takes his 3rd top 4 finish in 4 txs.  Finding a small honey hole up river, he ground out his last 3 fish.  JC's 4 fish weigh in at 6.76 lbs and take some important 3rd place points in what promises to be a tight race for Rider and Angler of the Year!!!
​
Mark Ely did not catch numbers but he did get some size. His one fish weighed 3.68 lbs and was enough for him to claim the lunker and 5th place. ​
CCBM Tournament #5
August 8, 2020- Nanticoke River  ​
​One angler keeps dominating  while riders keep ROLLING!!!

​On a day where tides were higher then usual one again after storms that rolled through the area during the week anglers take advantage once the tide rolled out.

​Stan Horne makes it 3 wins in 4 tournaments as he looks to claim another AOY.
Stan has a record setting day as he lands the largest bag weighed in for our club on the Nanticoke River. His limit of Bass that weighed 12.84 lbs included the days lunker that goes 4.60 lbs

​Ryan Sweeney has a hell of a day on the back of the boat. He caught 4 fish on a day when bites where hard to come by. Those 4 fish weighed 6.01 lbs. This is his 2nd top 3 finish and looking for #3.

​Jim Pro is having a sneaky good year. Finishing in 3rd today gives him 2 top 4 finishes in 4 tournaments. His bag weighs in at 4.68 lbs giving him 93 points going into the next tx on the Conowingo.

​One angler keeps dominating  while riders keep ROLLING!!!
Same headline as last tournament as the theme for 2020 stays the same.
Rolling lunker pot takes a hit as a 3.50 + Smallie hits the scales.  Riders take 2 of the 3 top spots as one rider makes it two 2nd place finishes in a row.

Paul Sirochman joins the club and immediately has an effect AOY Standings . Not only does he come in and takes a 2nd place finish in his first tx but follows it up several txs later with a BIG win!!
Paul takes the Trifecta by winning the days Lunker, the win and the Rolling Lunker!
His bag weighs in at 11.10 lb which included a 4 lb SLOB Smallie!!!!

Once again Ryan Sweeney has a hell of a day on the back of the boat. He caught 4 fish for 8.43 lbs on a day when bites where hard to come by. Obviously one boat was around the fish. Ryan's boater takes first as he takes a 2nd place and was one decent bite away from a possible win.

​Steve Manista uses his experience as a boater to take a 3rd place finish as a rider.  Unfortunatiley he only had 1 good bite but it was enough to give him important AOY points with only 4 txs left. His thick Smallie weighs in at 2.64 lbs on a tough day.